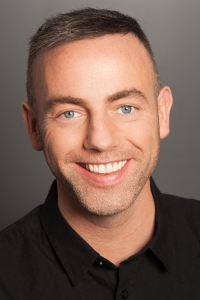 I am thrilled to welcome Domhnall O’Donoghue to my blog. If you feel you recognise him, well that’s because he’s on our telly in the wonderful series called, Ros na Rún on TG4. Domhnall is a man of many talents and is the friendliest, kindest person to speak with. I put a few questions his way.

Can you tell us a little about yourself?
I’m an actor, journalist and author. I hail from Co. Meath’s largest town – Navan. The word is a palindrome, which gives locals much pride!
Today, I divide my time between Dublin, Venice – where my boyfriend grew up – and Connemara where I film the television series Ros na Rún. I also work in media and in addition to writing a monthly column for Woman’s Way magazine, I’m a travel journalist. My wanderings to destinations such as Jamaica, Istanbul and Chicago have formed the backdrop to all of my novels.

What genres do you like to write in?
My first three novels are all comedy, although the styles are drastically different. The best way of describing my first two books – Sister Agatha (Tirgearr Publishing) and Colin and the Concubine (Mercier Press) – is larger-than-life characters overcoming larger-than-life situations.
For me, the story comes first and then I decide what genre would best tell it. Comedy isn’t the right fit for Book #4 – my current WIP. Instead, it is a hybrid of suspense, drama and mystery.

What is the title of your latest book, (tell us a bit about it)?

My latest book is called Colin and the Concubine and it’s a yarn about a long-lasting sibling rivalry set against the backdrop of a brothel in 1990s Navan. It was inspired by my six-month stint living next-door to one in Dublin – the things I saw; the things I heard!
The story is full of Irish nostalgia – for instance, the climax takes place during the heats of the final-ever Calorgas Housewife of the Year Competition. Do you remember watching that on RTE?!
Below the surface, it’s a critique on the double-standards that exist in our society along with being an exploration into how skilled we’ve become at presenting a version of ourselves to the world that can often be in stark contrast to our real, authentic selves.
The response has been really positive so far from both readers and the media, and it’s proven to be a popular choice for bookclubs and beach reads.

What are you currently working on? I wrote the first draft of my current WIP the week following the death of my dear aunt on St Patrick’s Day. It was an extremely cathartic process. The working title is Connie Maguire Wants to Help and the action takes place over three days, played out in reverse order. I’m really excited about it and have loved writing it.

When and where do you like to write? Have you a favourite place?
Because there’s so much movement in my life, I’ve learned to work on the go, so I’ll happily write on a train or plane, in a café or at home. I’m a dab hand at drowning out the world – unless, of course, I’m using it as inspiration!
When I’m in my apartment in Dublin (like today), our cat, a Persian rescue called Prince, keeps me company! This is probably my favourite place to work.

Has there been a defining moment in your career that made you think, ‘Yes, I am a writer’?
I’ve definitely felt, ‘Yes, I am a journalist’ but I’ve yet to properly feel, ‘Yes, I am an author’. That’s okay – it motivates me. In saying that, seeing copies of Colin and the Concubine in the shopfront of Dubray Books on Grafton Street was a rather lovely moment, I must confess!

What is next for you? I’m just about to begin the editing process with Mercier Press on my third book – a comedy about a soap actor and a rather zealous fan. The working title is Crazy for You but that might change!
The inspiration? Many moons ago, I joked to friends that my goal in life was to have a stalker – “That would mean that I’ve made it!” says I. A pal warned: be careful what you wish for. The book is an imagined version of that wish coming true!
There’s a lot of ‘me’ in this book – the main character, Clooney, is very much based on Domhnall. Again, it was an extremely rewarding process allowing myself to be vulnerable by recalling – and documenting – the highs and lows of my life.
I’m really excited to start the editing process with Mercier; working with them on Colin on the Concubine was probably the most satisfying and creative collaboration of my career to date.

Colin and the Concubine Colin Saint James hates his older brother, Freddie – and for good reason. A true psychopath, Freddie has been hell-bent on destroying Colin’s happiness since before he was born! Never one to admit defeat, Colin searches for opportunities to get one up on his sibling, even just once. When the heats for the final ever, Housewife of the Year competition are announced, Colin sees his chance. The only problem is he needs a wife. Luckily, he lives next door to Navan’s best-looking woman, Azra, who happens to be single and anxious to get a ring on her finger. But Azra is also a Turkish concubine and she and Colin don’t exactly see eye-to-eye over her nocturnal activities.
Will Colin be able to park his reservations about his X-rated neighbour if it gives him the chance to emerge triumphant over Freddie for once in his life?

My many thanks for Domhnall giving his time to chat with us. Below are links where to buy his books and also if you want to learn more about Domhnall and connect with him, those links are there too.

Colin and the Concubine: https://www.mercierpress.ie/irish-books/colin-and-the-concubine/

Family is important to Mary and her writing reflects the ups and downs of it all, and what people go through daily. She has been writing short stories for several years and enjoys success with her fiction in magazines, newspapers, and anthologies both in Ireland and abroad, namely Germany, India, and the US. Her stories have been both short/long listed in various competitions. It was because of this success, Mary took the plunge and self-published her first collection of stories titled, A Baker’s Dozen (2012). When one of her stories kept growing she ended up with her first published novel, My Husband's Sin. This novel turned into a trilogy, with book 2, Don't Call Me Mum, and book 3, No More Secrets following it. Her latest novel, To Live With A Stranger, is based on her Grandmother's country cottage and is a firm favourite with readers. Mary continues to write novels, novellas, and short stories, dabbling too in playwrighting. In 2019, Mary attended the University of Limerick and studied for a MA in Creative Writing, receiving First Class Honours. When taking a break from writing and reading Mary loves to crochet. Living in County Cork, Ireland, she is married and is a mother of four children. Having overcome open heart surgery in 2008, Mary made the decision to dedicate more time to her writing. With her children raised and starting to spread their wings, this became possible. Now, Mary is also a Nana, a role that brings her happiness and lots of love. View more posts